Until tonight, little news was released following last night’s destruction of the Orb-3 launch from the Mid-Atlantic Regional Spaceport at Wallops Island, VA. I can’t say that I was surprised, as they must have spent the entire day assessing damage, collecting debris, and  just starting to make sense of what happened before they released a statement.

Sure enough, tonight NASA and Orbital Sciences Corp (the company who built and launched the Antares launch vehicle and Cygnus cargo spacecraft) have both issued statements. But first, here’s what the launch pad looked like today:

Wow. The first thing I notice is the charred blast which appears to have been largely directed toward the beach. That makes sense since the rocket was heading upward and slightly eastward at the time of the explosion. But take a look at that launch tower – it’s knocked to about a 45 degree angle. And two of the four lightning rod towers are completely gone. Still, to my untrained eye, most of the structure appears to be intact. But let’s hear it from Orbital themselves (emphasis mine):

The overall findings indicate the major elements of the launch complex infrastructure, such as the pad and fuel tanks, avoided serious damage, although some repairs will be necessary. However, until the facility is inspected in greater detail in the coming days, the full extent of necessary repairs or how long they will take to accomplish will not be known.

That’s encouraging news. Pad 0A is the only pad certified to launch Antares so the sooner it can be repaired, the sooner the Mid Atlantic Regional Spaceport s can get back to supporting the International Space Station. Still, it’s far too early to tell the full extent of the damage. Still, the initial image released by NASA does seem to back up the statement:

Local news station WAVY released video of the launch complex and the surrounding area. They got some good shots of the launch pad and of the debris that had washed ashore:

Mind you, this is still very early in the investigation. It’s going to be months before there’s another rocket launch out of Wallops, to the space station or anywhere else. But we’ll take the encouraging news as we get it.

By now you’ve probably heard that the Antares rocket carrying the Orb-3 resupply ship to the International Space Station exploded shortly after liftoff. Details are coming in fast and furious and I’ll have more to say as the facts trickle in. What follows is my own personal account and some thoughts on tonight’s events.

I was on top of the roof of Smith Hall at Towson University with four of my physics students. We were looking toward the southeast, toward NASA’s Wallops Flight Facility in Virginia, hoping to catch a glimpse of the Antares Rocket on its flight to the International Space Station. Although I had NASA TV playing on my iPhone, our eyes were trained on the horizon. In my experience I’ve found that NASA TV is anywhere from 30 to 60 seconds delayed. So we started scrutinizing the horizon as soon as the clock read 6:22 pm. By my guess, we should see the rocket emerge from the horizon even as we were listening to the final countdown play out on the phone.

But no rocket appeared.

I then heard something that sounded like a crackling sound coming from my iPhone. I looked down at the screen and saw this:

I’ll spare what I said next, but suffice to say it was not the sort of thing a professor would normally say in front of his students.

Realizing there wasn’t going to be a rocket rising over the horizon, we went downstairs to the classroom. I put NASA TV on as the students filed in for the class that was to begin at 7pm. I had given my students the “homework” assignment of trying to spot the rocket’s flight over the horizon; a timely assignment as we had discussed the physics of rockets and space flight last week.

I started class by filling them in on what had happened. I explained what little we knew and what we didn’t yet know. Needles to say, there were a lot of questions: Was there anyone on-board? Was anyone near the launch pad? Will they be able to launch from there again? Will the astronauts aboard the International Space Station have enough food?

Thankfully, I could answer the most important question — nobody was on-board the spacecraft, nor was anyone anywhere near the launch pad. In fact, NASA was reporting that all personnel were safe and accounted for. Thank goodness.

The students got to see a perspective of spaceflight that they probably hadn’t considered before — this stuff is difficult, challenging, and dangerous. Rockets have to unleash a tremendous amount of fuel as fast and with as much energy as possible. Only then can the spacecraft accelerate forward in reaction to the controlled explosion raging underneath it.

It’s a lot harder than it looks.

After I got home, I watched the news conference and shared some reactions on Twitter and Facebook. A lot of people are upset tonight and understandably so. Many man-years of hard work and effort were lost tonight, including the spacecraft, the rocket, and most of an entire launch complex.

But now the investigation is underway. It’s tempting to speculate what might have been the cause, but I’ll refrain from doing so here. There is a lot of data that will need to be examined, including telemetry, video, and even the scrap paper used by the launch team.  And then there’s the physical debris that will need to be collected and scrutinized.

NASA and Orbital Sciences Corp. have their work cut out for them. But I’m also confident that they will find out what the problem is, correct it, and get back to flying again. In the meantime, I hope that my students and the public can use this as an opportunity to learn an important lesson:

There’s nothing routine about spaceflight.

Update 27 October 2014, 6:47 pm EDT: Launch is scrubbed due to a boat in the exclusion zone in the Atlantic ocean to the East of the Launch pad. They’ll try again for a new 6:22 PM EDT launch time on Tuesday, October 28. I hate launch-stopping boaters.
Update 27 October 2014, 3:00 pm EDT: Come for the launch, stay for the station! I forgot to mention that since this is a nighttime launch to the International Space Station, the station itself will pass overhead around these parts. Here in Maryland, the station will rise in the Northwestern sky at 6:49 pm EDT, fly overhead, and set in the Southeastern sky about 6 minutes later. Visit NASA’s Spot the Station website to find out where to look for ISS in your neck of the woods.

Orbital Sciences Corp are getting ready to launch another Antares rocket carrying a Cygnus resupply ship to the International Space Station. The spacecraft is on-board the rocket, the rocket is on the pad and, as of this writing, is 98% GO for Monday night’s launch out of NASA’s Wallops Flight Facility. Launch is scheduled for 6:45pm EDT.

It’s looking like we’ll have clear skies here in Maryland and should be in for a pretty good show. As always, NASA and Orbital have provided some viewing guides to help you spot the launch.

Get the app & know where to look

An even better resource is to get What’s Up at Wallops mobile app which will point you in the direction towards the launch pad at Wallops. The app is available for Android and Apple iOS.

While you’re at it, be sure to get the free NASA TV apps for Android and Apple iOS as well. Use these apps to monitor the countdown while you’re heading outside to look. Bear in mind that the streaming to your phone is usually delayed by up to a full minute so don’t count on it for true “real-time” information.

Make sure you can get a clear line of sight to the southeastern horizon. Since this is night launch, you should be able to spot a rapidly moving “star” emerging from the southeast and heading further toward the east. You should be able to see the first stage’s exhaust plume and maybe even see the first stage separation and second stage ignition. To give you a rough idea of the shape of the arc as seen from Maryland, here is a Google Earth mockup of the launch from Baltimore:

And for my Physics students, here is a simulation from Towson University:

And finally, here’s one for my friends & family in the Philly/Springfield PA area:

And here’s a map that shows the approximate amount of time that will pass after liftoff and when you should be able to start seeing the rocket:

Orbital Sciences Corp have some additional viewing maps for Orb-3 that show simulated views from Washington DC, Delaware, and Virginia. If you have Google Earth, you can download the .kmz file and view the launch path from your location. For some viewing tips, I’ll refer you to a previous post of a similar ISS resupply mission. Good luck and Go Antares/Cygnus! 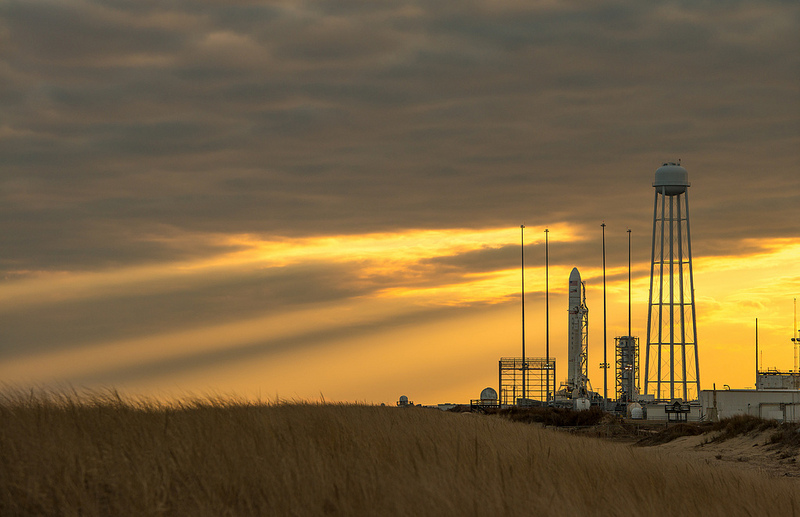 We had some time to kill today, so Tom Wolf and I made a little video to explain today’s launch postponement. Since making this video, we learned that launch is GO for tomorrow, so yay! My full post is below, but in the meantime…

I woke up this morning in my hotel to a beautiful, albeit cold, morning on Chincoteague Island, VA.  I glanced at my email only to discover that today’s launch had been postponed. It wasn’t a problem with the Cygnus spacecraft, nor the Antares rocket, nor (thankfully) a new problem on board the International Space Station. Everything was perfect down here on earth.

But in space, the weather was absolutely horrible. Here’s why:

Holy mother of all sunspots, Batman, those are HUGE! To give you an idea of just how large we’re talking about, let’s make a little comparison for scale:

Those sunspots are the reason for today’s postponement. Sunspots are regions of magnetic instability on the “surface” of the Sun. They mark the locations of magnetic field lines that rupture, unleashing a storm of charged particles into space at speeds of up to 2 million miles per hour. Those particles strike Earth’s magnetic field, giving us aurorae at the north and south poles:

Unfortunately, that means a lot more radiation in the near-Earth environment, and this poses a problem for launch. The Cygnus spacecraft is “hardened” against radiation, but the Antares rocket isn’t, and the launch team were concerned that it might play havoc with the rocket’s avionics, hence the postponement.

Damn the protons, full speed ahead!

This afternoon, the launch team met to review the data and have decided to go ahead with tomorrow’s launch! Launch is set for 1:07pm EST.

That’s a good thing, because the astronauts are still waiting for their Christmas presents.

Yesterday, Orbital Sciences rolled out the Antares rocket to the launch pad, hoping for a launch of Orb-1 to the International Space Station tomorrow. I’ll be heading down to Wallops Island tonight and will be out in the cold watching the launch (yes I know, I’m really taking one for the team here.)

As the trajectory for tomorrow’s launch hasn’t changed, I updated my launch viewing guide with the planned launch window.

Launch is scheduled for tomorrow, January 8 at 1:32pm EST. Hope you get to see it from where you are!