The Moon is our nearest celestial neighbor, but it’s tempting to think it’s much closer to Earth than it really is. The Moon has an average distance from Earth of 384,399 kilometers (or 238,854 miles if you prefer). We know that’s far, but how far is that really? It turns out it’s far enough to fit every other planet in the solar system with room to spare. Check it out:

I spotted this image on Twitter and thought it was a perfect illustration of the actual distance between the Earth and the Moon. But even then I needed a double-check so I went to Wikipedia, found the equatorial diameter of each of the planets and added them up. Sure enough, they came out to less than the average Earth-Moon distance:

As you can see, the average distance (or semi-major axis) between the Earth and Moon can accommodate all of the planets with room to spare! But perhaps the most dramatic example of the actual distance to the Moon is to simply just show it to scale:

Space is big. It’s really, really big. So big that it’s hard to not end this post with a quote from Douglas Adams:

Artist Jeremy Huggins has a simple, yet effective way of demonstrating the sizes of the 8 planets in our solar system (sorry dwarf planets):

Update: Jeremy has some more very cool retro style space-themed pieces you should definitely check out.

Below are links to PDFs of my talks from Launchpad 2013:

UPDATE June 11, 2013: Due to the predicted severe weather in the Reading, PA area, tomorrow night’s talk has been postponed to September 12 (right in the middle of hurricane season!) 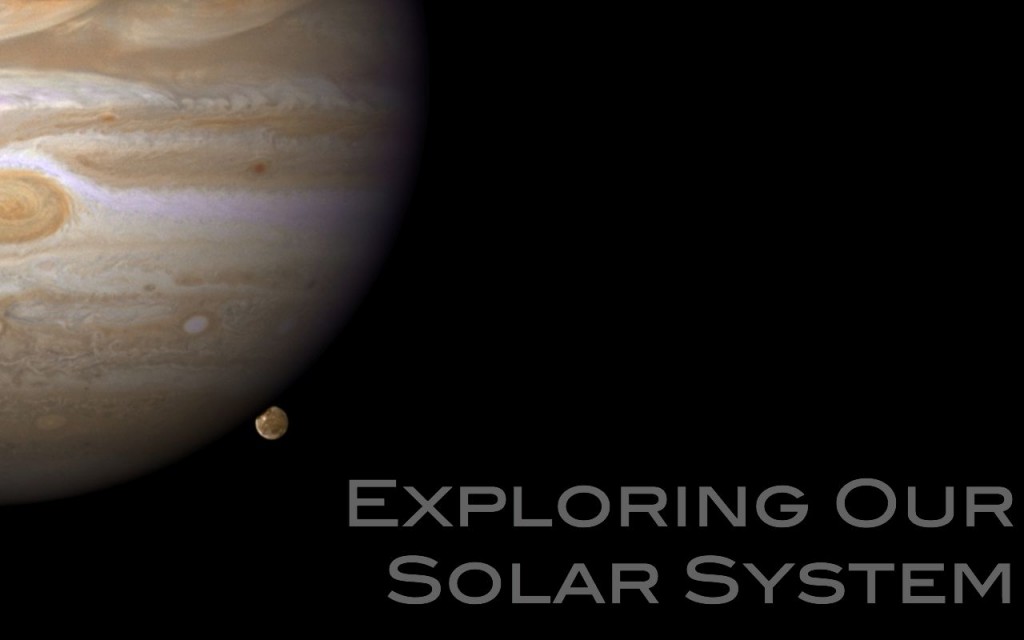 Hot off the heels of my guest lecture on the Solar System at the Community College of Baltimore County, I’ve been invited back to the Berks County Amateur Astronomical Society in Reading, PA to discuss the same thing, which is a good thing as I’ll probably be teaching it in greater depth at the upcoming Launchpad Astronomy Workshop in July. From their website:

Our understanding of our Solar neighborhood has fundamentally changed over the last few decades.  What used to be just the Sun and 9 planets is now a celestial city of gas giants, rocky planets, ice giants, dwarf planets, asteroids, water worlds, and primordial comets all in orbit around a single star, our Sun.  In this talk, astronomer Christian Ready will discuss the similarities and differences of these worlds and what they can tell us about the formation and history of our Solar System.

There really is a lot going on in our Solar System nowadays, with active missions to Mercury, Venus, Mars, the Asteroid Belt, Saturn, and spacecraft on their way to Jupiter and Pluto. So what used to be considered an elementary topic in astronomy is being updated at a pretty remarkable rate. And of course there’s the whole Pluto controversy that will probably need to be discussed.

I enjoy giving these talks and if you’re in the Reading area, please feel free to drop by the Reading Public Museum on Thursday,  September 12 2013 at 7:30 pm.

And since we’re still talking about Pluto, here’s a video I made explaining the whole mess:

It’s hard to believe that the Cassini mission to Saturn has been in operation for over a decade now. So much has been learned about Saturn, its rings, and its moons, but nothing of course compares to the steady stream of jaw-dropping images like this:

That’s close enough to make out a range of features. The most striking feature is the thick black shadow cast by Saturn’s innermost ring, followed by a series of thinner shadows cast by outer rings. In fact, the shadows themselves create a kind of “negative” of the rings themselves, the rings are black and the main gap between the rings – the Cassini division – shows up as white!

Now, I love full-color images of Saturn as much as the next person. But there’s something about the raw, unprocessed black-and-white images of Saturn that are just incredible. In fact, this image was made with Cassini’s “clear” filters, which is as close to a truly raw, unfiltered image of Saturn you can get. In fact, you should really check out the full-resolution version which shows off the details in all of its awesome raw-iness.

This image also illustrates how fundamentally different it would be to live on the surface of a planet like Saturn (ignoring for the moment that Saturn doesn’t have a solid surface to live upon). Seasons would be very different at different latitudes within the hemispheres. Some regions would still see the sun during the daytime, while others would be in permanent shadow for several months. Imagine looking up at the sky to see the rings backlit by the sun every day!