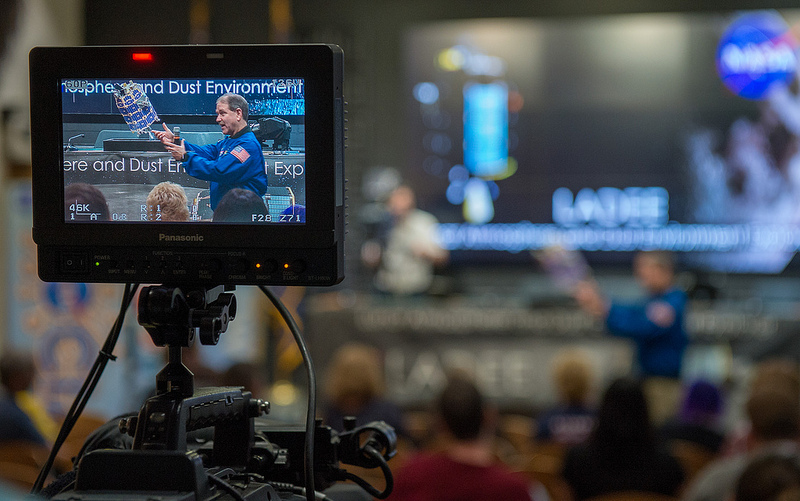 So much happened during the two days of our NASA Social Meetup at the LADEE launch, a single blog post of any substantive detail is a post that may never get published, let alone read. So instead, I’ll try to break it up into smaller bits to have a play in the weeds a little. Since much has been written about the launch by others far more capable than I, I’ll try to stick to how things went from my own personal perspective.

The first thing we did on Thursday was meet in the press room to receive a special welcome and introductory briefing that was broadcast live on NASA’s Educational Channel to classrooms around the world. Not a bad way for us and a lot of students to learn about the LADEE mission together. Here’s the video:

Over the course of the two days, we attended several briefings, including the official press briefings which were broadcast on NASA TV. But this first one for NASA’s educational channel turned out to be far and away the most comprehensive. If you have the time, watch the whole thing and you’ll learn about the spacecraft, the science objectives, and the launch operations. Also, I’ll put our level of questions against the traditional media any day.

In the interest of brevity, and of my mom, I’ll quickly highlight the bits where I pose some questions.

Our first speaker was John M. Grunsfeld, Associate Administrator for the Science Mission Directorate. He welcomed us and talked about how excited he was to see us returning to the Moon with LADEE and exploring a part of the lunar environment that is largely unknown to us. Grunsfeld is one of my heroes because as an astronaut, he flew on three servicing missions to the Hubble Space Telescope. As an astronomer himself, NASA couldn’t have asked for a better person to run the space science side of the NASA house.

At the 18:00 mark, I asked Dr. Grunsfeld what it was like to be the last person to touch the Hubble Space Telescope. He gave a response that was as accurate as it was humble: he didn’t actually touch Hubble directly since he was wearing the thick rubber gloves in his EVA spacesuit. In fact, every technician who ever touched Hubble wore gloves of some kind. But he quickly pivoted to suggest that tens of thousands of people actually touched Hubble over the last 24 years since its launch, and during the 15 years of its development before it was launched. A humble answer indeed.

Grunsfeld also spoke about what it was like to ride the Space Shuttle into orbit. He’s a great storyteller and if you don’t have time to watch the whole video, just watch the first segment with Grunsfeld.

Up next was Dr. Sarah Noble, program scientist for LADEE. At the 36:00 mark, I ask her about what overlap LADEE might have with other lunar missions currently in progress. She points out that there are currently three other lunar missions in progress right now: the Lunar Reconnaissance Orbiter (LRO), which is currently making detailed measurements and imagery of the lunar surface, ARTEMIS, which is monitoring the Sun / Earth / Moon environment. The LRO and LADEE teams are currently working to figure out how they might be able to work together, while the ARTEMIS team will most likely be able to give the LADEE team weather reports based on solar activity hitting the Moon.

Next was Bob Barber, the LADEE Spacecraft Systems Engineer from NASA Ames in California. LADEE is Ames’ baby – it was designed and built there and will even be flown from there as well. A big first for LADEE is the use of the Common Spacecraft Bus (CSB) architecture. CSB is an attempt to make spacecraft easier (and therefore cheaper) to build for a given range of missions. LADEE is the first spacecraft to use the CSB approach:

LADEE looks eerily similar to the Apollo Command and Service Module, but there’s no way the tapered shape at the top has anything to do with aerodynamics or even fitting into the fairing of the Minotaur V, so I asked what was up with that at 56:04. It turns out that the tapered angle gives them a way to get extra solar power in case they ever find themselves tipped away from the Sun for some reason.

Like I said, the whole thing is well worth your time watching if you really want to learn about LADEE. It’s also a great way for us space geeks to watch and go “HEY! I know that guy/girl!!!” every time the camera points to the audience. NASA Associate Administrator for the Science Mission Directorate John Grunsfeld is seen in a video monitor during a NASA Social about the Lunar Atmosphere and Dust Environment Explorer (LADEE) mission at the NASA Wallops Flight Facility, Thursday, Sept. 5, 2013 on Wallops Island, VA. Fifty of NASA’s social media followers are attending a two-day event in support of the LADEE launch. Data from LADEE will provide unprecedented information about the environment around the moon and give scientists a better understanding of other planetary bodies in our solar system and beyond. LADEE is scheduled to launch at 11:27 p.m. Friday, Sept. 6, from NASA’s Wallops Flight Facility. Photo Credit: (NASA/Carla Cioffi)

This coming Friday, NASA is going to launch the Lunar Atmosphere and Dust Environment Explorer (LADEE) from its Wallops Flight Facility in Virginia. That alone is enough reason to get excited, but I’m super-duper excited because I’m going to the launch!

LADEE (pronounced lah-DEE; think of Scotty yelling “laddie” at one of his redshirts) is on a mission to investigate the Moon’s atmosphere. I know what you’re thinking: “The Moon has an atmosphere?” You bet your EVA boots it does! You see, it’s impossible for a world as rocky and dusty as the Moon not to have some particles hovering about. Craters are constantly forming as asteroids slam into the lunar surface, kicking up dust. With just one-sixth the gravity of Earth, it’s going to be a while before that dust settles down. In the meantime solar heating and other new craters keep the particles above the lunar surface replenished and behold! The Moon has an atmosphere!

Sort of. Technically, the Moon has an exosphere because the particles don’t touch each other for the most part. For some reason, they’re calling it LADEE and not LEDEE. Lucky for me, I’ll be able to find out why they named it the way they did because I’ll be there to ask.

I was lucky enough to be selected to participate in a NASA Social at Wallops this Thursday and Friday to cover the launch as an interested citizen. With a blog. And a Twitter account. And a Facebook profile. In other words, someone who digs this stuff and likes to tell people about it. In fact, the NASA Social folks were kind enough to tell others about me:

The two days we’ll be there will be packed with briefings, tours of the facility, and a chance to talk with some of the people who have worked tirelessly to bring this mission to life. I’ll also be able to meet some of my fellow science geeks and serve as a kind of citizen journalist covering the launch.

It’s all been a bit surreal, and I have to keep reminding myself that I’m going to actually be an eyewitness to the launch. But I’m sure things will feel very real at liftoff.

When I was a wee undergraduate astronomy student, my favorite activity was serving as a Teaching Assistant to the core astronomy lab. For some reason, I enjoy helping others to learn about the universe or something. Anyway, one year the chair of the Honors program at Villanova asked the Astronomy department to create a special class for their Honors students – presumably, the core astronomy course wasn’t challenging enough for their students. We agreed and I was set to TA the lab. We found it to be a rather challenging experience, not because they were testing the limits of our knowledge, but because we were very rapidly testing the limits of the students’ tolerance of ideas outside of their area of study.

One example was a student who was incensed at the idea that we know the age of the universe and that it is expanding. Evidently, this knowledge was in conflict with his understanding of the universe as taught to him by Aristotle, Kant, and others. In other words, he accepted the tenants of philosophy as fact and rejected everything he learned in our class that conflicted with it.

Of course, that’s just one example, but I could certainly give others. And my tales are hardly unique – there has been some pushback from against science from the Humanities for quite some time now, so this is nothing new. In fact, scientists (myself included, in the most generous use of that term) have been long been accused of amoral reductionist thinking that ignores the “magic” of the world. There’s even a term for this view of the world, Scientism (1)As if using science to understand the world were a bad thing.

But today I read piece by Steven Pinker, a professor of psychology at Harvard, that is the best defense of science I’ve ever seen. There are  hundreds of gems to mine from the article, but I’ll whet your appetite with this:

The facts of science, by exposing the absence of purpose in the laws governing the universe, force us to take responsibility for the welfare of ourselves, our species, and our planet.