Our Sun is a wonderful, active, and occasionally downright spooky star if you look at it right. As luck would have it, the Sun presented a decidedly Jack-o-Lantern face to the Solar Dynamics Observatory on October 8 2014.

Suffice to say, we could never see the Sun like this with our own eyes. Instead, the Jack-o-Lantern image was created by combining two sets of ultraviolet images that would normally be colored gold and yellow. But since it’s so close to Halloween, the SDO team went with black and orange and the result is hallow-eerie-awesome! You can view the individual images that made up the Jack-o-Lantern composite at NASA’s Goddard Spaceflight Center website.

Even though our Sun has been relatively weak compared to recent decades, it still puts on tremendous displays of magnetic activity. Its magnetic field lines get twisted and form regions of magnetic activity on the surface of the Sun. We see these active regions as sunspots in the visible part of the spectrum, but in ultraviolet we can see the plasma suspended in these magnetic field lines. The result is spectacular: 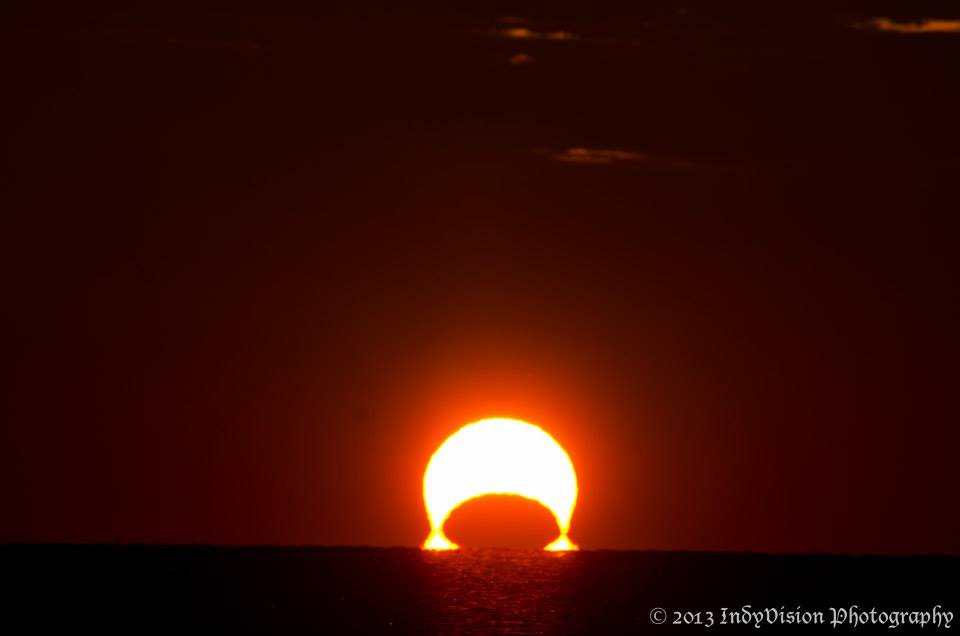 My friend Mark Kochte has done it again, this time capturing a spectacular time-lapse of this week’s partial solar eclipse (as seen from those of us on the East Coast). Click HD, go full screen, turn up your speakers, and enjoy:

The sequence is brief, as was the eclipse itself, lasting no more than about 40 minutes from sunrise. By this time, the Moon’s shadow was directly over the Atlantic Ocean. People on a ship at the right location were being treated to a spectacular show.

Meanwhile, back in Maryland, Mark wanted to get as “low” on the horizon as possible, so he made a predawn trip down to the Chesapeake Bay to capture the Sun as it rose over the water’s edge.

As you watch the video, you’ll see the moon moving westward away from the Sun, casting its shadow further west toward Africa.

It’s a beautiful video and, coupled with an understanding of where we stood on Earth at the time of eclipse, serves as a powerful reminder of just how fortunate we are to live on a planet with a satellite at just the right distance to completely eclipse the Sun for a few minutes every now and then.

When I saw this image I thought “wow, what an awesome painting!” But that’s not a painting at all – instead, it’s an actual image of the Sun taken in Ultraviolet light by the Solar Dynamics Observatory on August 31 2012, and it was a monster! Here’s the breakdown:

A filament of relatively cool gas had been suspended for several days in the upper atmosphere by the Sun’s magnetic field. The magnetic field on the Sun is very dynamic, with its local field lines tangling and twisting as the Sun rotates. This causes escaping gases to be trapped in the field lines and “hang” in the atmosphere for several days or even weeks at a time. These filaments can be huge. How huge? Huge:

But that’s not all … if opposite magnetic field lines are brought together, the result is a powerful release of matter and energy called a Coronal Mass Ejection. And that’s exactly what happened here, hurtling the filament, plus a whole lot more, out at over 900 miles per second!

Even better, NASA caught the whole thing on video and put it together into a spectacular movie featuring footage from SDO, SOHO, and even STEREO-B from the far side of the Sun (be sure to go to HD and full screen for maximum awesomeness):

Over the next two years the Sun will be approaching solar maximum, which means we should be treated to even more spectacular events like this one.