Philae now lies somewhere in the dark on Comet 67P. Its batteries drained, it has gone into hibernation, probably for the last time. Its story was nothing short of dramatic, exciting, and seemingly tragic for so many of us here on Earth unable to do anything but watch the little lander die from 300 million kilometers away.

And yet, it was one of humanity’s finest hours.

If you were to stop reading this post right now and head on over to phoenixpic’s post about Philae’s brief, but highly successful race-against-the-clock mission, I’d be totally cool with that. It’s a well-told tale that puts a lot of the events into its proper context.

But I remain in awe of just what an amazing success the Philae lander was. Despite its failed downward thruster, bouncing not once but twice away from its planned landing site, its harpoon system not being fired, a lens cap not coming off its spectrometer, ending up in the shadow of a cliff, deprived of the sunlight it badly needed to recharge its batteries,  despite all of those things….Philae still managed to fulfill its mission.

Think about that for a second. Against all odds, all of the available science instruments on board Philae were able to sample a 5 billion year-old relic from the formation of the solar system. Ok sure we’re not going to be able to go into an extended mission with Philae. We’ll never be able to see a beautiful panorama of the surface and watch it gently erupt as it draws nearer to the Sun.

But there is a ton of data already gathered and much, much more to come from the Rosetta orbiter itself. We’ve come a long way, and there is much to be learned. This is what Ambition looks like. 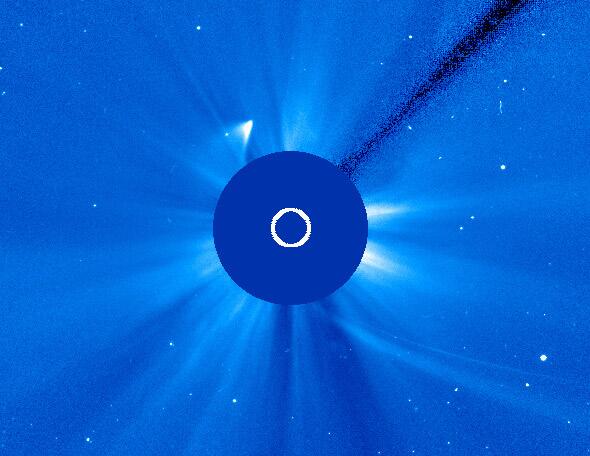 Update Nov 29, 2013 09:11 EST: Since this post was first published, there have been additional SOHO observations which have been added to the movies below. They show the (remnants?) of Comet ISON getting brighter! Updated video below.

The folks at the Solar and Heliospheric Observatory (SOHO) have been busy on this Thanksgiving Day taking images of ISON’s flight around the Sun. While we had hoped ISON might survive its closest approach, the truth is that a sungrazing comet’s chance of surviving a trip around the Sun is remarkably similar to that of a snowball in hell.

Even so, the results are quite surprising. Take a close look at the last few frames of the video:

Let me explain the video a bit: The Sun is at the very center of the image, but in order for SOHO to take images of its outer heliosphere, it must block out the Sun itself. The Sun’s disk is drawn in white so we can tell exactly where it is, but the occulting disk needs to be considerably larger than the Sun itself in order to block out its light.

ISON enters the field of view in the lower right, peaking in brightness at around 0:10 (the horizontal line it produces is not real – it’s an artifact due to the detector saturating, a process called blooming).

ISON starts to dim as it goes “under” the occulting disk, and that’s typically an indication that the comet is breaking up. But then something appears to emerge from underneath the disk, and it’s pretty damn bright!

In the updated image taken at 12:30 UTC on November 29, the object has moved farther away and continues to appear rather comet-like:

Here’s another view of the event, taken with SOHO’s LASCO C2 instrument, which has a close-in field of view:

All of this is to say…I have no idea. Comets are very strange creatures, and they surprise us all the time. At this point, I can hardly make any conclusions, and from what I’m reading on the interwebs even comet specialists are stumped. And that’s the best part of all of this. Being surprised by nature is part of what makes science so fun!

ISON may very well be the little comet that could.